WHOSE WHISKERS WILL WIN ‘MOST TALENTED BEARD IN AMERICA'? 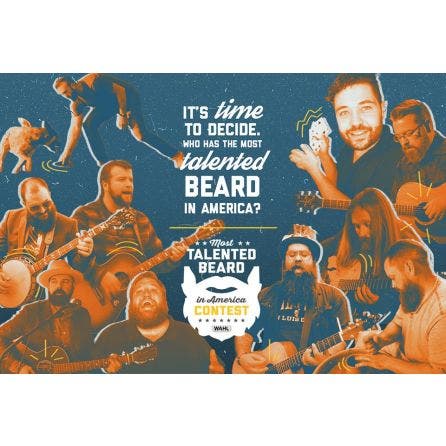 Need proof that life is better with a beard? The second-annual ‘Most Talented Beard in America’ contest is just one example. Men’s grooming leader Wahl knows there’s a wealth of whiskered talent out there, so the company is once again looking to reward furry phenoms. Bearded hopefuls from across America submitted videos of their talents, 10 finalists were chosen — and now public votes will help decide the winners. The 1st place victor takes home a cool $20,000 and becomes the newly crowned ‘Wahl Man of the Year,’ 2nd place scores $10,000 and 3rd place walks away with $5,000.

“The goal of this contest is to shine a spotlight on entertainers and achievers who make the world a better, or ‘bearder,’ place to live,” said Steven Yde, division vice president for Wahl. “We were blown away by the excitement the contest generated last year, and the life-changing impact the prizes had on the exemplary men who won. Our hope is to keep the positive momentum rolling, so we’re once again calling on the American people to help us name the winners this year.”

Vote for the ‘Most Talented Beard in America’ at https://bit.ly/MostTalentedBeard.

Presenting, the Top 10 ‘Most Talented Beards in America’ (in no order):

Wahl’s quest to find furry phenoms started in July when it put out the call for men with beards to submit a video of themselves performing a talent. More than a hundred hairy hopefuls entered, and 10 fuzzy-faced finalists were chosen. The next step: from now until October 15, 2021, the public can vote for their favorite bearded performer at https://bit.ly/MostTalentedBeard, they can also get to the voting page by visiting @WahlGrooming on Facebook or Instagram.

The stakes? First place wins $20,000 and the coveted title of ‘Wahl Man of the Year.’ The 2nd place winner takes home $10,000 and 3rd place scores $5,000. Winners will also receive a visit from Wahl’s mobile barbershop, and an arsenal of Wahl grooming gear to keep their beards looking (and performing) their best. The three furry front-runners will be announced in late-October.

For more information about the ‘Most Talented Beard in America’ contest, including official rules, visit WahlUSA.com.