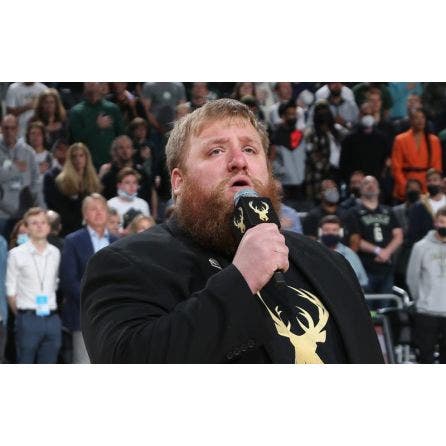 STERLING, Ill. (Nov. 15, 2021) – Ben Tajnai from Milwaukee has graced thousands with his angelic voice, most notably singing the National Anthem for the Milwaukee Bucks. It’s been said he was the team’s lucky charm during the 2021 NBA Finals, and fans repaid him in a big way by helping him bring home his own big championship win. As the 1st place winner in the second-annual ‘Most Talented Beard in America’ contest, Tajnai scores $20,000 and the title of ‘Wahl Man of the Year’. Hosted by men’s grooming leader Wahl, the goal of the contest is to shine a spotlight on entertainers and achievers who make the world a better, or ‘bearder,’ place to live.

Wahl knows there’s a wealth of whiskered talent out there, so this past July the company launched a search for furry phenoms. Hundreds of hairy hopefuls submitted videos of their talents, 10 finalists were chosen, and public votes determined the top 3 winners. In addition to Tajnai’s 1st place $20,000 prize, the 2nd place winner gets a hefty $10,000 and 3rd place walks away with $5,000.

Tajnai’s well-earned beard bragging rights started well before this competition. “My beard is a huge part of who I am,” he explained. “For as long as I can remember, I’ve been known as the big guy with the beard. It makes me approachable, especially when it comes to Bucks fans.”

“My wife and I cried when we heard that I won,” continued Tajnai. “We’ve been wanting to take our three kids on vacation for so long, and we finally have the means to do it. What’s even better is that we know there will be money left over to donate to a charity.”

According to Tajnai, his win is a testament to the amazing support of friends, family and the Milwaukee Bucks fans who voted for him. He also says he’s in good company with the following runner ups, who also garnered impressive support:

·      2nd Place winner Ben Davis Jr. from Chillicothe, OH, is a singer whose down-home song is accompanied by his acoustic guitar. His $10,000 prize is more than welcome after a tough year when earning a living as a musician was hindered. Davis plans to move to Nashville with the help of his prize money and take the next steps forward in his songwriting career.

·      3rd Place winner Collin Smith from Omaha, NE, is a multi-talented marvel whose skills include smooth guitar playing, skateboarding, standing backflips and fire juggling. He takes home $5,000 and plans to use it to support his many ongoing pursuits as an artist.

In celebration of Tajnai’s win, and in appreciation for the Bucks fans who helped make it happen, Wahl will be parking its giant Mobile Barbershop outside Fiserv Forum on game-day Wednesday, November 17, 2021 from 2:30 p.m. – 6:30 pm (central). Facial-haired fans can stop by for a FREE beard trim, and once they’re camera-ready, they can get a pic with Tajnai.