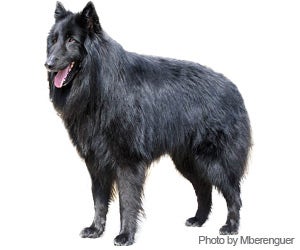 No aspect of home dog grooming requires as much time and regular devotion as brushing. Routine brushing keeps your pet’s hair clean and tangle-free, while keeping his skin healthy by stimulating blood flow, removing dead hair and distributing natural oils.


Double-coated dogs have two distinct coats -- a soft undercoat and a protective outer coat -- as well as a combination of straight and short-to-moderately long hair, making it a challenge sometimes to maintain proper grooming. It's why double-coated breeds are often considered moderate to moderately high on the grooming scale, requiring a minimum of weekly brushing. Their harsh outer coat often results in profuse shedding, while the undercoat can become matted very easily. A neglected undercoat can be very painful to brush out. Use a slicker brush, combination comb and shedding blade to maintain a smooth, tangle-free coat.

Once a year, the Belgian Sheepdog will shed quite significantly. During this time, give them a warm bath to help them release hair and remove any dead hair from the coat.

Clipping or trimming your dog’s coat is far easier than you would ever imagine. With the right clipper, trimmer and scissors, it is simple to give your dog a haircut and save expensive trips to the groomer.

Dogs with double coats generally require regular trimming. It lessens the chances of matting, tangles and the infestation of fleas and other pests, thus reducing the risk of skin infections. There is no set timetable. Judgment should be made on an individual basis, depending on functionality and owner preference. There are a wide array of trimmers available that will make each snip a snap. It’s a good idea to take your dog for a short walk to calm him down before you groom him.  Thoroughly brush the coat to remove tangles and mats. Use trimmers to trim excess fur off the dog's body, choosing the appropriate clip attachment to achieve desired length. Start with the shoulders and progress towards the tail. Trim around the tail, paws, sanitary areas and chest, if needed. Groom the head and face last, being watchful for sudden movement. Trim with the flow of the fur, away from the eyes and nose.

Don't forget to check your Belgian Sheepdog's ears for loose hairs or infection.

Brush his teeth at least twice a week.