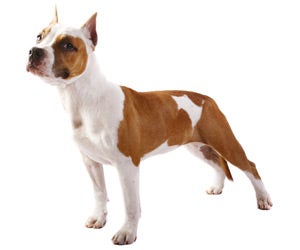 Grooming the American Staffordshire Terrier is not a challenge. They do shed, so their coat should be brushed down with a stiff bristle brush and wiped gently with a damp cloth to stay shiny and beautiful.

Smooth coated breeds adhere to the general rule of dog bathing: about once every three months. The coat should end up fresh smelling, shiny, with no loose or shedding hair. First give the dog a good brushing to remove dead hair and mats. Place a rubber mat in the tub to provide secure footing and fill the tub with three to four inches of lukewarm water. Use a spray hose, pitcher or unbreakable cup to wet the dog, taking caution to avoid getting water in the eyes, ears and nose. Massage in pet shampoo, saving the head for last. Immediately rinse thoroughly, starting with the head to prevent soap from dripping into the eyes. Towel dry. Wipe wrinkled breeds with a soft cloth and make sure they are totally dry after bathing.

Clipping or trimming your dog’s coat is far easier than you would ever imagine. With the right clipper, trimmer and scissors, giving your dog a haircut is easy on your wallet and your schedule.

Dogs with smooth coats generally only require trims and tidying up in areas of excessive hair growth using a trimmer or blunt scissors. It's always wise to take a dog for a short walk or exercise to calm them down before trimming. Remember to brush the coat first to remove any tangles and mats. Don't forget to trim around the paws, pads, tail, chest and sanitary areas, as needed. The coat should lay flat and smooth against the body when finished.

It is always important to routinely clean your dog's eyes and ears, and examine for potential infections. Some smooth-coated dogs, like Basenjis and Boxers, and dogs with large ears, like Weimaraners and Great Danes, have sensitive ears that should be checked  weekly for infection and cleaned with a cotton ball. Gently wipe a cotton ball moistened with mineral oil, olive oil or witch hazel in your dog's ear, being careful to avoid the ear canal. Never use a Q-Tip, which could cause damage to the inner ear if your dog suddenly shakes or jerks his head. Bushy hair growth within the ear can be thinned with tweezers or blunt scissors. Use a small trimmer to trim excess hair around the eyes, ears and face. If you have a small dog, like an Italian Greyhound, take special care to  clean around their eyes with a cotton ball or soft cloth and use a small trimmer to trim excess hair around their eyes to make sure they are comfortable. Dogs with facial wrinkles, like French Bulldogs and Boston Terriers, should have their faces wiped down at least weekly to prevent infection.