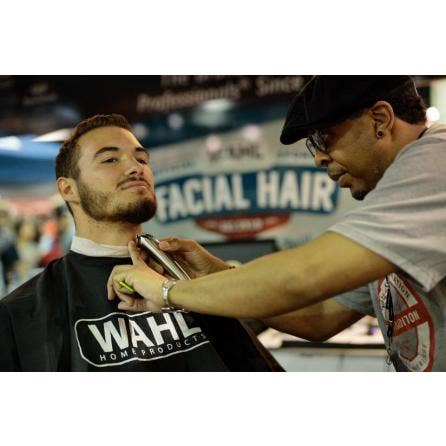 STERLING, Ill. (June 3, 2019) – Beards abound mile after magnificent mile in Chicago, which is why the city is a perennial player in the annual ‘Most Facial Hair Friendly Cities in America’ research study from men’s grooming leader Wahl. In fact, the city’s rabid sports fans - and teams - are known for their facial hair prowess. This distinction, combined with the Chicago Bears’ quarterback beard pact last season, helped launch the city into the No.1 spot on this year’s rugged roster.

To celebrate Chicago’s newly minted moniker, Wahl is kicking off its national ‘Facial Hair Friendly Cities Tour’ at the Bears100 Celebration Weekend June 8-9, 2019. Tickets are still available for this largest gathering of Chicago Bears ever; and as the gridiron grizzlies and their fans come out of hibernation to congregate, they can stop by Wahl’s giant 30-foot Mobile Barbershop to tame their face fur. In addition to offering FREE mustache and beard trims, Wahl will host Chicago Bears quarterback Mitchell Trubisky at the barbershop from 1 p.m. – 2 p.m. on Saturday, June 8, 2019. Trubisky will take his turn in the barber chair for a touch up, and engage with fans in some fun facial hair activities.

“General beard buzz on social media dictates the results of our annual study — now in its sixth year; however, with facial hair so rooted in sports, it’s no surprise chatter about the Bears influenced the results this year,” said Steven Yde, division vice president for Wahl. “In fact, the stars really aligned this time around. Like the Chicago Bears, Wahl is also celebrating 100 years, making our presence at the Bears100 Celebration Weekend even more profound.”

Chicago’s climb up the facial hair food chain is well earned; especially since it narrowly missed the top honor last year — coming in at No. 2 after Philadelphia. One reason for the city’s jump could be attributed to the success of the Chicago Bears last season. With one of the biggest fan bases around, the wave of whiskered sentiment on social media was inevitable when Trubisky proved he can beard with the best of them. Like many other Bears brethren before him, Trubisky’s facial hair was with him when he helped the team clinch the NFC North title for the first time in nearly a decade.

“Last season was my first time having a beard; it started out as a pact among the quarterbacks and coaches,” said Trubisky. “I had faith we would make it to the playoffs, so I started my playoff beard a little early — and it paid off.”

Trubisky further explained, “While some guys grow beards to intimidate, for me it was about exuding confidence.”

According to research, Trubisky’s approach stands up. In 2014 Wahl partnered with STATS, the world’s leading sports analytics company. They analyzed fantasy football data to prove that pro football players with facial hair performed better than their clean-shaven counterparts. In fact, 86 percent of scruffy signal callers averaged at least 20 fantasy points per game compared to only 56 percent of clean-shaven quarterbacks. Facial hair also impacted quarterbacks’ ability to avoid the rush and gain yards on the ground. Among the top 10 rushing quarterbacks, seven rocked healthy stubble.

Chicago marks the kick-off of Wahl’s annual mobile grooming tour, which includes taking a 30-foot mobile barbershop on the road to visit the 10 Most Facial Hair Friendly Cities in America. At each tour stop, Wahl’s team of master barbers will give guys free facial hair trims for a good cause. For every trim, Wahl will donate $1 to ZERO - The End of Prostate Cancer, the leading national nonprofit with the mission to end prostate cancer.

The 10 finalists will each win $500 and a commemorative Wahl 100th Anniversary Box containing a limited-edition trimmer and grooming products. Online voting will help determine who wins the Grand Prize, which includes the title of Wahl Man of the Year and $1,500. The contest runs from June 8, 2019 – Oct. 18, 2019.

Editors’ note: Wahl partnered with market research leader Engine Group to conduct the ‘Most Facial Hair Friendly Cities in America’ study, which involved in-depth analysis of the online universe over the past year for beard and mustache positivity. Social conversations and searches surrounding facial hair were measured, and cities were ranked based on overall interest and positive sentiment. (source: Crimson Hexagon)

About Wahl Grooming
Celebrating its 100th anniversary, Wahl continues to help men look and feel their best with innovative products manufactured to define and elevate the men’s grooming category. The company set the standard with the first-ever practical electric hair clipper in 1919, and later strengthened its leadership with the world’s first battery-powered facial hair trimmer. Wahl crosses its centennial milestone by introducing a complete line of personal care products including a beard oil, shampoo, and body wash. It’s this continued commitment to excellence that has solidified Wahl’s place as the world’s go-to brand for men’s grooming solutions. For more information, visit WahlUSA.com

About Engine
Engine exists to help future-proof our clients’ businesses. In a fast-changing world, we empower our clients to outperform in the present and win in the future. Driven by data. Fueled by imagination. Powered by technology. We are an ecosystem of creative wunderkinds, uber-nerds, business consultants, cultural mavens and channel specialists, helping clients to grow. With global headquarters in New York and 17 offices across North America, the UK, Europe and Asia-Pacific, Engine offers clients a vast range of marketing solutions—including insights, content, distribution, data and technology. Find out more at enginegroup.com or follow us @Engine_US.

Combat Veteran Named Most ‘Benevolent Beard’ in America, Celebrates With Green Bay Packers
My Wish List
Last Added Items
Go to Wish List
You have no items in your wish list.