WHOSE WHISKERS WILL WIN BEST BEARD IN AMERICA? 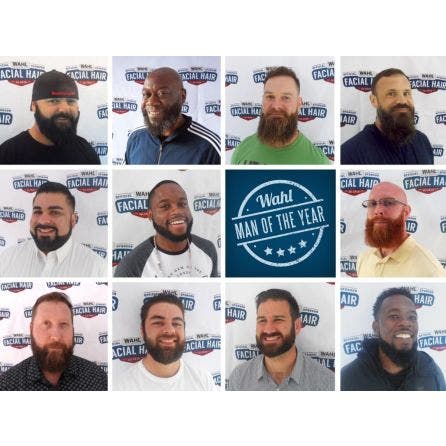 STERLING, Ill. (Nov. 20, 2019) – Now through Dec. 4, 2019, your vote will help determine who has the finest facial hair in America. Over the last year men’s grooming leader, Wahl, traveled to the Top 10 Most Facial Hair Friendly Cities in America; along the way, a handful of bearded brethren ‘made the cut’ and were crowned champions of their respective cities. These whiskered specimens are now finalists in the annual Wahl Man of the Year Contest, but they need your votes to determine who will win the grand prize — the title of Wahl Man of the Year, $1,500 and ultimate beard bragging rights.

To vote for the next Wahl Man of the Year visit http://bit.ly/2019WahlManoftheYear.

“For more than a decade we’ve searched all corners of the country for real guys, with a real passion for facial hair,” said Steven Yde, division vice president for Wahl. “This year we found some great contenders, but we’re looking to the public to tell us who resonates the most with them. No matter the result, all these guys have whiskers worthy of the Wahl stamp of approval.”

Wahl’s annual search for the Wahl Man of the Year kicked off this past June when the Facial Hair Friendly Cities Tour visited the No. 1 city, Chicago. The tour features a 30-foot mobile barbershop and a team of Master Barbers traveling to the Top 10 Most Facial Hair Friendly Cities to give guys free trims and grooming advice. Style delegates were chosen at each of the Top 10 cities, and one ‘Man of Anytown’ was chosen from entrants who fell outside of Top 10 cities. All 11 finalists won $500 and a commemorative Wahl 100th Anniversary Box containing a limited-edition trimmer and grooming products. But, only one finely groomed finalist will go on to win top honors, which includes an additional $1,000 and the title of Wahl Man of the Year. Voting runs from Nov. 20, 2019 – Dec. 4, 2019.

Celebrating its 100th anniversary, Wahl continues to help men look and feel their best with innovative products manufactured to define and elevate the men’s grooming category. The company set the standard with the first-ever practical electric hair clipper in 1919, and later strengthened its leadership with the world’s first battery-powered facial hair trimmer. Wahl crosses its centennial milestone by introducing a complete line of personal care products including a beard oil, shampoo, and body wash. It’s this continued commitment to excellence that has solidified Wahl’s place as the world’s go-to brand for men’s grooming solutions. For more information, visit WahlUSA.com.