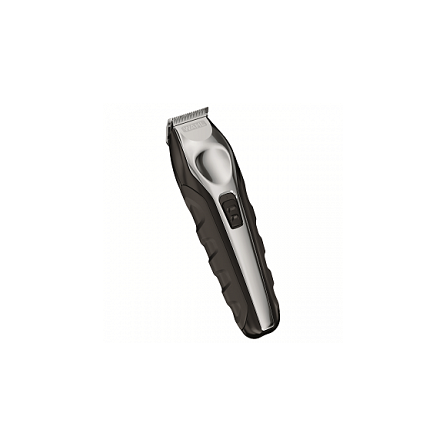 STERLING, Ill. (March 5, 2016) – New research from Wahl shows that 77 percent of guys sport facial hair at some point during the year. Their style of choice—beards. To support them, Wahl announces the Lithium Ion Total Beard Trimmer, the world’s most powerful rechargeable facial hair trimmer designed specifically for beards big and small.

To say Wahl’s latest addition brings a little ‘attitude’ to the company’s popular lithium ion line of grooming tools is a bit of an understatement. It’s designed for performance, but also intimidation—boasting “knobby-tire” side grips that at first glance lead you to believe this grooming device is a power tool. But that’s okay because it’s engineered with the same “get it done” mentality that today’s brotherhood of beard-wearers share in common.

And getting it done is what the new Lithium Ion Total Beard Trimmer excels at. It features Wahl’s patented precision-ground blades that self-sharpen with every use. Combine that with advanced lithium ion power—offering three times the runtime and two times the torque—and the result is a superior rechargeable trimmer designed to tackle even the toughest of beards.

But what makes the Lithium Ion Total Beard Trimmer the ultimate tool for beard maintenance is the 13 guide combs that come with it. All told, they allow for more than 19 different beard lengths, from stubble all the way to an inch or longer. For even greater control, the rugged and sporty Lithium Ion Total Beard Trimmer even features a large thumb rest.

“The beard is back—and it’s coming in all shapes and sizes,” said Steven Yde, division vice president of marketing for Wahl. “That’s where Wahl’s new Lithium Ion Total Beard Trimmer comes in. It’s the first grooming tool designed with the power and accessories required to maintain a full spectrum of beards.”

The Wahl Lithium Ion Total Beard Trimmer is available for retailers and consumers with an MSRP of $34.99. The new addition is part of a growing family of lithium ion products from Wahl, which includes the original Lithium Ion Trimmer, Stainless Steel Lithium Ion + Trimmer, and the Lithium Ion Pro Clipper. More information on Wahl grooming tools can be found at www.wahlgrooming.com. You can also connect with Wahl on Facebook, Twitter and YouTube. Retailers interested in more information about Wahl products should call (815) 625-6525.

About Wahl Home Products
Wahl Home Products is a division of Wahl Clipper Corporation, a worldwide leader in the manufacturing of products for the consumer personal care, animal grooming and professional beauty and barber salon trade. Based in Sterling, Ill., the company is celebrating its
97th anniversary this year. For more information, visit www.wahlhomeproducts.com.