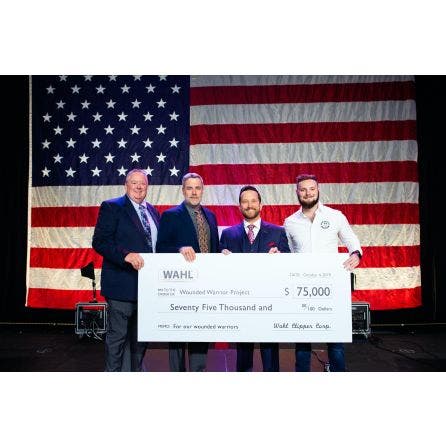 INDIANAPOLIS (Oct. 5, 2019) – Leaders in American manufacturing gathered on Friday, October 4, 2019, at the Indiana Convention Center for a special dinner to celebrate American veterans. The evening honored military heroes by acknowledging their contribution in building an infrastructure that supports the ‘Made in the USA’ economy. Wahl Clipper Corporation, the 100-year-old company still headquartered in Sterling, Ill., proudly presented a $75,000 check to Wounded Warrior Project (WWP). The dinner was part of Made in America 2019, a four-day event where hundreds of exhibitors and thousands of attendees gathered for one common goal: to raise awareness and support for the economic, environmental and community impact of American manufacturing.

“Since its inception, Wahl has been committed to continually improving its products and looking forward to future possibilities,” said Yde. “That’s why we’re so honored to support a forward-thinking organization like Wounded Warrior Project. Their efforts are helping the brave men and women of our military build toward a bright future.”

Wahl Created Buzz at Made In America 2019

Since 1919, Wahl has been at the forefront of firsts — starting when founder Leo J. Wahl invented the first hair clipper. Further innovations included the first cordless facial hair trimmer and the first men’s grooming tools to harness the power of lithium ion. Today, it’s no surprise Wahl is the number one hair clipper and trimmer manufacturer.

After 100 years of innovation, however, one thing has remained steadfast — the family-owned company’s commitment to keep their products made in America. This is one of the reasons Wahl was proud to come together with like-minded manufacturers at Made in America 2019.

In addition to honoring WWP with a $75,000 donation, Wahl offered attendees a truly interactive experience with free beard trims at their giant 30-foot mobile barbershop. Men with exceptional facial hair also stopped by the barbershop for a chance to win the Wahl Man of the Year Contest.

Wahl Home Products is a division of Wahl Clipper Corporation, based in Sterling, Ill. For the last 100 years, the company has remained a trusted name and industry leader, manufacturing products for consumer personal care, animal grooming and professional beauty and barber salon trade. For more information, visit WahlUSA.com.