Wahl Is Rewarding Men Who Combine Good Grooming with Goodwill 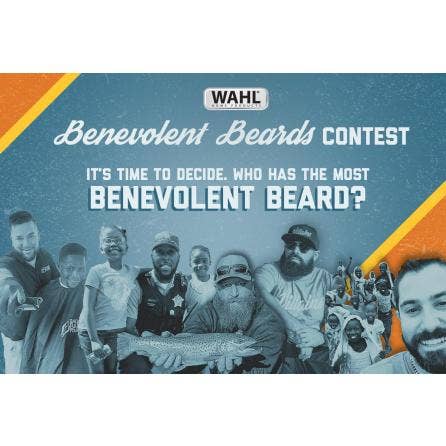 STERLING, Ill. (July 14, 2022) – Men’s grooming leader Wahl is celebrating bearded men who are doing good, while looking good — with the Wahl ‘Benevolent Beards’ Contest. A wealth of whiskered men from across America submitted videos demonstrating their benevolent acts. Five finalists were chosen, and now public votes will help decide who receives the Grand Prize of $20,000 for himself, and $5,000 for his charity. He’ll also be crowned the new ‘Wahl Man of the Year,’ a moniker that boasts a facial-haired family spanning 15 years.

“The goal of this contest is to shine a spotlight on men who are making the world a better, or ‘bearder,’ place to live,” said Steven Yde, division vice president for Wahl. “We were blown away by the inspirational entries and loved learning about the positive impact of so many deserving charities. It was incredibly difficult to narrow the finalists down to just five, and we can’t wait to see how the public responds to each of these worthy men.”

Vote for the most ‘Benevolent Beard’ in America by Aug. 5, 2022, at https://bit.ly/BenevolentBeards.

Presenting, the Top 5 most ‘Benevolent Beards’ in America (in no order):

About the Wahl ‘Benevolent Beards’ Contest

The Wahl ‘Benevolent Beards’ Contest started this past April with a quest to discover guys who are making the world a ‘bearder’ place to live. The goal was to reward bearded men who are doing good through charitable efforts. Men from across the country submitted a video of themselves either explaining or demonstrating how they support a charity. What kind of charity? As long as it was a 501(c)(3) organization with a goal to impact the world positively, all charities were considered. Five fuzzy-faced finalists were chosen, and America’s votes will help decide the Grand Prize Winner and our next ‘Wahl Man of the Year.’ Voting is open until August 5, 2022, on the contest page at https://bit.ly/BenevolentBeards, you can also get to the page by visiting @WahlGrooming on Facebook or Instagram.

The stakes? The Grand Prize Winner will receive $20,000 for himself, and a visit from Wahl’s Mobile Barbershop for a charity fundraising event. Master barbers will offer the public FREE beard trims, and for every trim Wahl will donate $100 to the winner’s charity of choice — up to $5,000. Each of the five finalists already won $500 for themselves, $500 for their charity and grooming gear.

Celebrating its 103rd anniversary, Wahl continues to help men look and feel their best with innovative products manufactured to define and elevate the men’s grooming category. The company set the standard with the first-ever practical electric hair clipper in 1919, and later strengthened its leadership with the world’s first battery-powered facial hair trimmer. Wahl crosses its centennial milestone by introducing a complete line of personal care products including a beard oil, shampoo, and body wash. It’s this continued commitment to excellence that has solidified Wahl’s place as the world’s go-to brand for men’s grooming solutions. For more information, visit WahlUSA.com