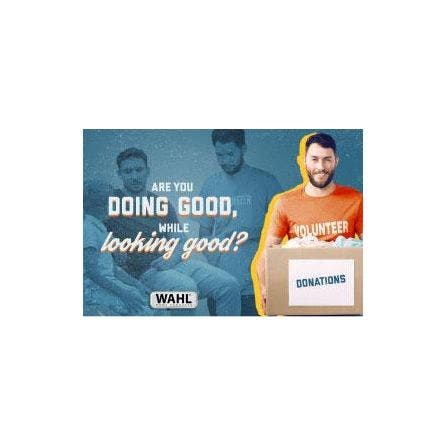 STERLING, Ill. (April 7, 2022) – Are you doing good, while looking good? Men’s grooming leader Wahl is looking to reward guys who are making the world a ‘bearder’ place to live. The Wahl ‘Benevolent Beards’ Contest will present one Grand Prize winner with $20,000 for himself, and $5,000 for his charity. He’ll also be crowed the new ‘Wahl Man of the Year,’ a moniker that boasts a bearded brotherhood spanning 15 years. Over the years, the contests to find these ‘Wahl Men’ have differed, but the prize-winning title has remained the same. This facial-haired family is full of interesting men doing interesting things to better the world — and the benevolent acts of these past winners inspired this year’s contest.

“Wahl is dedicated to making the world a ‘bearder’ place,” said Steven Yde, division vice president for Wahl. “What does that mean? We’re making a concerted effort to celebrate and support those with beards who are making the world better. This contest is just one example of how we’re working to spread positivity and goodwill.”

How to Enter the Wahl ‘Benevolent Beards’ Contest

From April 7 – June 6, 2022, men with beards can submit a video of themselves either explaining or demonstrating how they support a charity on the contest entry page at https://bit.ly/BenevolentBeards, they can also get to the page by visiting the @WahlGrooming Facebook or Instagram pages. What kind of charity? As long as it’s a 501(c)(3) organization with a goal to impact the world positively, all charities will be considered. So, whether you’re an animal advocate or helping humans, you have the chance to put your good grooming toward goodwill.

After the entry period Wahl will select 5 finalists, and each will win $500 for themselves, and $500 for their charity. In addition, they’ll receive a Wahl Lithium Ion Stainless Steel Trimmer and a starter kit of Wahl’s new Beard Care line. Things get really exciting in mid-July when public votes help determine which finalist wins the Grand Prize of $20,000 for themselves, and a visit from Wahl’s Mobile Barbershop to do a fundraising grooming event for their charity. At the event, barbers will offer the public FREE beard trims, and for every trim Wahl will donate $100 to the charity — up to $5,000.

Celebrating its 103rd anniversary, Wahl continues to help men look and feel their best with innovative products manufactured to define and elevate the men’s grooming category. The company set the standard with the first-ever practical electric hair clipper in 1919, and later strengthened its leadership with the world’s first battery-powered facial hair trimmer. Wahl crosses its centennial milestone by introducing a complete line of personal care products including a beard oil, shampoo, and body wash. It’s this continued commitment to excellence that has solidified Wahl’s place as the world’s go-to brand for men’s grooming solutions. For more information, visit WahlUSA.com.