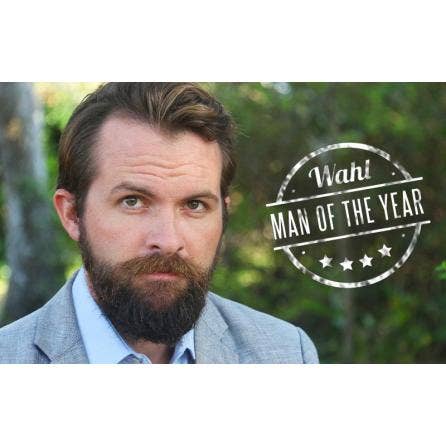 STERLING, Ill. (Dec. 15, 2020) – Jonathan Brannan from Ocean Springs, Miss., can carry a tune, drop a dad joke — and sport a sweet beard. It’s his range of talents, along with a knack for balancing family and fun, that has made him the winner in the first-ever ‘Most Talented Beard in America’ contest. Hosted by men’s grooming leader Wahl, the contest came along at just the right time for Brannan, as he plans to use his $20,000 prize money to adopt a baby this spring.

In a year full of heavy news, Wahl launched the contest as a way to spread positivity and celebrate all of the bearded guys out there. The quest to find furry phenoms started in September when the company put out the call for men with beards to submit a video of themselves performing a talent. Hundreds of hairy hopefuls entered, 10 finalists were chosen, and public votes determined the top 3 winners.

In addition to bringing home $20,000, as the grand prize winner Brannan also earns beard bragging rights with the new title of ‘Wahl Man of the Year.’ It’s a title Brannan didn’t foresee; while a lifelong fan of beards, he faced some facial hair hurdles. By the time he got to an age where he could actually grow a beard, he was also starting his career as a TV reporter, and it wasn’t allowed. However, once he left the TV biz, both Brannan and his beard flourished. He’s now the development director for the Jackson County Chamber of Commerce, and enjoys life with his wife and 6-year-old daughter. The family of three is excitedly anticipating the addition of a baby boy they will adopt in April 2021.

“It's kind of every man's dream to be recognized for his beard, and the story behind this recognition is wild,” said Brannan. “It blows my mind, to be honest. Just the fact that I found out about the contest literally the day before the entry deadline is crazy enough, but then the rest of the story, including our adoption needs makes winning this even sweeter.”

According to Brannan, his win is a testament to the amazing support of friends, family and everyone who voted for him. Brannan is in good company with the following runner ups, who also garnered impressive support: