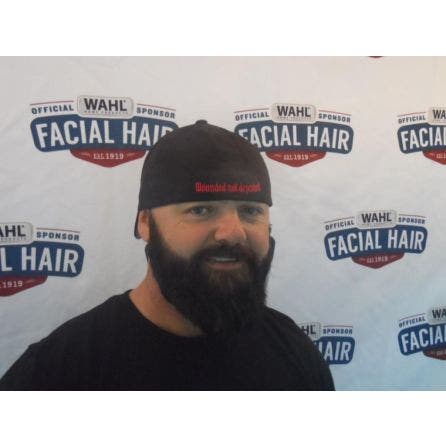 STERLING, Ill. (Dec. 11, 2019) – Zack Brown from Marietta, Okla., has many gifts. He has a gift for gab, he has a gift for giving back and he has a gift for growing great facial hair. All these gifts culminated into an honor he never expected — his beard now wears the badge of ‘Best in America,’ and he now owns the title of Wahl Man of the Year.

Each year Wahl’s mobile barbershop visits the Top 10 Most Facial Hair Friendly Cities in America in search of the nation’s most winning whiskers. While finalists are chosen to represent each of the Top 10 Cities, the contest is also open to beards from across the country. In fact, after combing through hundreds of entries, Brown was plucked as the eleventh finalist in the ‘Man of Anytown’ category. He went on to prevail with ultimate beard bragging rights and the coveted Wahl Man of the Year title.

In addition to maintaining his newly minted moniker, Deputy Sheriff and retired Army Sgt. Zack Brown, dedicates his life to helping other veterans and first responders suffering from post-traumatic stress disorder (PTSD) through his charity Casualties of War.

“When I got out of the military I made a vow to never shave again,” said Brown. “For many veterans and first responders a beard is a symbol of freedom, and moving past the trauma they saw in the line of duty.”

Brown further explained, “My beard is just one more way I can connect with guys who are suffering and need someone to talk to.”

As the next Wahl Man of the Year, Brown takes home a $1,500 grand prize, and he will rightfully reign as an example of great facial hair throughout 2020.

About the Wahl Man of the Year Contest

Wahl’s annual search for the Wahl Man of the Year kicked off this past June when the Facial Hair Friendly Cities Tour visited the No. 1 city, Chicago. The tour’s 30-foot mobile barbershop and team of Master Barbers traveled to the Top 10 Most Facial Hair Friendly Cities to give guys free trims and grooming advice. Style delegates were chosen at each of the Top 10 Cities, and Brown was chosen from the ‘Man of Anytown’ category which included entrants who fell outside of Top 10 Cities. Each finalist received $500 and a commemorative Wahl 100th Anniversary Box containing a limited-edition trimmer and grooming products. Online votes helped Brown rise to the top of the facial hair food chain, and he was awarded the $1,500 grand prize and the title of Wahl Man of the Year.

“Our annual Man of the Year Contest is designed to find and celebrate real guys with a real passion for facial hair,” said Steven Yde, division vice president for Wahl. “This year the contest is celebrating much more than that. We’re honored to shed light on someone who has dedicated his life to helping the brave men and women of our military build a brighter future — congratulations Zack.”

Celebrating its 100th anniversary, Wahl continues to help men look and feel their best with innovative products manufactured to define and elevate the men’s grooming category. The company set the standard with the first-ever practical electric hair clipper in 1919, and later strengthened its leadership with the world’s first battery-powered facial hair trimmer. Wahl crosses its centennial milestone by introducing a complete line of personal care products including a beard oil, shampoo, and body wash. It’s this continued commitment to excellence that has solidified Wahl’s place as the world’s go-to brand for men’s grooming solutions. For more information, visit WahlUSA.com.