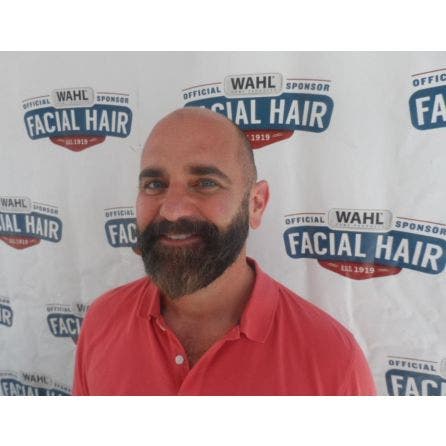 From early lumberjacks, to modern-day computer programmers, a healthy beard is common workplace attire in the Emerald City — just ask Seattle school teacher Chris Talone. His beard has been getting attention in the classroom for years, but now it’s on the national stage as Talone is the winner of the annual Wahl Man of the Year Contest.

Each year Wahl’s mobile barbershop visits the Top 10 Most Facial Hair Friendly Cities in America in search of the finest facial hair. After combing through hundreds of entries, ten men ‘made the cut’ as finalists, but Talone prevailed with ultimate beard bragging rights and the coveted Wahl Man of the Year title.

“Our cross country tour of the Most Facial Hair Friendly Cities in America is a treasure map to real guys with prize-worthy whiskers,” says Steven Yde, division vice president for Wahl. “The Man of the Year contest is a way to recognize these finely groomed gentlemen; and while all our finalists are exemplary, Chris’ outstanding beard and the support he received in votes helped him stand out from the pack.”

“I don’t have hair on my head, so I use my facial hair to express myself,” explains Talone. “I take the time to keep it looking good, and I encourage guys to experience the freedom that comes from shaving your head and growing a beard.”

As the next Wahl Man of the Year, Talone takes home a $1,500 grand prize, and he will rightfully reign as an example of great facial hair throughout 2019.

About the Wahl Man of the Year

Wahl’s annual search for real guys with a real passion for facial hair kicked off this past April when the Facial Hair Friendly Cities Tour visited the No. 1 city, Philadelphia. The tour features a 30-foot mobile barbershop and a team of Master Barbers traveling from city to city to give guys free trims and grooming advice. Style delegates were chosen at each of the ten Most Facial Hair Friendly Cities, including Seattle which has been on the list five years running, and came in at #6 this year. One man was also chosen from entries outside of the top ten cities. These finalists each won $500 and Beard Grooming Gear, which included a Lithium Ion Stainless Steel Trimmer and a starter kit of Wahl’s new Beard Care line. Online votes then helped Talone rise to the top of the facial hair food chain.