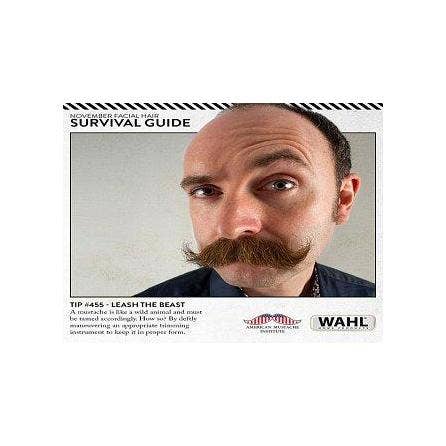 (STERLING, Ill.) November 2, 2016 – November has long held the prominent distinction as the most widely recognized time period during which bare-faced mortal men and women discover, or in some cases, rediscover, a deeply masculine and ruggedly handsome life of facial hair.  Indeed, since pre-Cambrian times, human ancestors and even Alabama residents have known that the best defense against sickness, impending cold weather, poverty and stupidity is the girth of a facial mane. These are basic facts of nature and laser cocksmanship which remain true to this day.

With these tenants of historical fact in mind, the non-partisan American Mustache Institute (AMI) — broadly considered the bravest organization in the history of mankind behind only the U.S. military and the post-Jim Henson Muppets — along with Wahl Grooming (www.wahlgrooming.com) — the preeminent producer of crumb-catching pruning products — today issued five vital tips of a multi-disciplinary education-focused public service partnership called the November Facial Hair Survival Guide. The effort focuses on mandating effective and proper facial hair growth during November to ensure for effective, efficient, long-lasting attractiveness.

“For many weaker Americans, November is a time of extreme experimentation while they work to determine their ability to accept a lifestyle of facial hair,” said Dr. Adam Paul Causgrove, chief executive of the American Mustache Institute. “We have a responsibility to assist those embarking on their journey to a better tomorrow, and along with Wahl we will achieve this mandate with swift militancy.”

Led by Dr. Causgrove and AMI’s Thermo Nuclear Mustachery Division in partnership with Wahl, the November Facial Hair Survival Guide will provide some 833 steps — released throughout the month — sharing insights and best practices for experiencing a sexually dynamic Mustached American lifestyle or simply one of broader facial hair.  The effort, Dr. Causgrove hopes, will ease the burden and pave the road toward a more effective, efficient, and prosperous life.

“We’re ushering in a pilgrimage,” he noted. “The journey to a fully-embraced Mustached American lifestyle begins with putting down the razor on day one, and we are here to hold your naturally calloused and possibly quivering hand through what may be a challenging first month.”

Five of the initial tips include:

To find the hottest havens for guys with scruff check out Wahl’s annual list of the Most Facial Hair Friendly Cities in America.  https://wahlusa.com/press/hair-topia-top-10-cities-guys-facial-hair

Let your facial hair do the talking

As the Official Sponsor of Facial Hair, Wahl encourages guys to sport their scruff all year long, but for those guys who are getting growing for a cause this November Wahl challenges them use their beards and mustaches to raise awareness for a cause that affects one in seven American men – prostate cancer. For the third year, Wahl has joined forces with ZERO – The End of Prostate Cancer to support their seasonal Grow & Give campaign to recruit guys who beard up in November to use their whiskers to spread the word and raise money to end prostate cancer, the second largest cause of deaths in men. As a sponsor, Wahl is sweetening the pot by donating facial hair trimmers to the top fundraisers.

“By growing facial hair men can not only support Grow & Give, but their beards and mustaches can spark important conversations, making them walking, talking billboards for the cause,” said Steven Yde, division vice president for Wahl.  “While they are growing we strongly encourage guys to fully embrace the facial hair lifestyle and pick up a Wahl trimmer to maintain their style after November as well.”

Participants in Grow & Give can start cultivating their facial hair any day in November and continue all month long. Wahl’s website, wahlgrooming.com, offers more than 40 facial hair styles to inspire guys and provides how-to tips to achieve the look and maintain it after the month is over. To get involved, visit Grow & Give at http://support.zerocancer.org/site/PageNavigator/GrowAndGive

For more information about the November Facial Hair Survival Guide, visit Wahl on Facebookor Twitter or AMI on Facebook or Twitter throughout the month of November.

The American Mustache Institute, www.AmericanMustacheInstitute.org, the bravest organization in the history of mankind behind only the U.S. Military and the post-Jim Henson Muppets is the world’s only facial hair advocacy and research organization with more than 800 global chapters. The organization battles negative stereotypes and discrimination against the Mustached American community and is committed to recapturing the 1970s-era glory years of Mustached American culture when there existed a climate of acceptance, understanding, and flavor saving for people of Mustached American heritage.

ABOUT WAHLTRIMMERS – “The Official Sponsor of Facial Hair”

A quarter-century ago, Wahl recognized the desire for well-kept facial hair and created the world’s first battery-operated facial hair trimmer. Since then, the company has developed a complete line of trimmers for specific facial hair styles as well as ear/nose, body grooming and multi-purpose use. This legacy of superior trimming innovation, which includes developing the first trimmer to harness the power of lithium ion, is why Wahl is now the “Official Sponsor of Facial Hair.” For more information about Wahl trimmers, visit www.wahlgrooming.com.

ZERO – The End of Prostate Cancer is the leading national nonprofit organization with the mission to end prostate cancer. ZERO advances research, encourages action, and provides education and support to men and their families through our patient-centric programs. ZERO’s premier activities include the ZERO Prostate Cancer Run/Walk, America’s largest men’s health event series. We are a 501(c)(3) philanthropic organization recognized with four out of four stars by Charity Navigator in 2014 and 2015, accredited by the Better Business Bureau, and 94 cents of every dollar donated goes to research and programs. For more information visit, www.zerocancer.org/