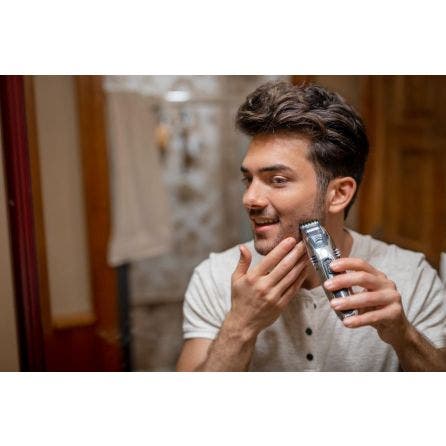 STERLING, Ill. (January 29, 2019) – Maybe it’s the follicular pheromones, or the fuzzy feel, but one thing is certain – women love men with beards. In fact, research has revealed the majority of U.S. women prefer a man with facial hair over a clean-shaven face. Something women don’t love, however, is the mess a neatly groomed beard can leave behind. So just in time for Valentine’s Day, men’s grooming leader Wahl is coming to the rescue with the new Wahl Lithium Ion Vacuum Trimmer – a gift he’ll want and she’ll praise.

“Knowing what men want from their trimmer is a priority, but we also dig deeper to find out what the women who live with bearded men think,” said Steven Yde, division vice president for Wahl. “Not surprisingly, mess-free trimming is high on their wish list. With this in mind, we think our new Vacuum Trimmer will make everyone happy.”

For the Love of Beards

Wahl’s had a hunch for years, but an online survey from market research leader ORC International confirmed it — the majority of U.S. women prefer a man with facial hair over a clean-shaven face (58 percent vs. 42 percent, respectively). Millennial women showed a particular panache with a 71 percent preference. In general, 65 percent of women find facial hair attractive, and 57 percent describe men with facial hair as masculine or handsome. As far as style, stubble topped the preference list and a well-groomed beard was a close second.

While women prefer a well-groomed beard, achieving this look often leaves an aftermath of wayward whiskers in the sink or covering the counter. Thankfully, the new Wahl Lithium Ion Vacuum Trimmer is designed with easy cleaning in mind. The trimmer crushes the competition with the highest air velocity in the industry. This translates into virtually all of the hair trimmings being captured — and no more mess.

Features special to the trimmer include an adjustable vacuum intake to control the amount of suction, and anti-choke exhaust ports on the front and back for high-performance. Clean up is a breeze with a hair canister that can either be removed and emptied, or popped open and dumped.

Standard to Wahl, the Vacuum Trimmer doesn’t compromise on its grooming capabilities with the power of lithium ion technology, a 90 minute run time, self-sharpening precision blades, LED charge indicator, nine guide combs and the option for corded or cordless operation.

The new Wahl Lithium Ion Vacuum Trimmer has a MSRP of $59.99 and is available at select retailers nationwide, or at WahlUSA.com.

About WAHL Grooming
A quarter-century ago, Wahl recognized the need for an easier way to keep facial hair well-groomed and created the men’s trimmer category. The Wahl Groomsman was the world's first battery-powered facial hair trimmer, and featured the same high-quality, precision blade technology that had defined the brand since it began in 1919. Today, Wahl offers a complete line of facial hair trimmers that features the latest in power and convenience, continuing the company’s legacy of superior trimming innovation. For more information, visit WahlUSA.com.

Editors’ note: Wahl partnered with market research leader ORC International to conduct an Online CARAVAN Omnibus survey of 502 adult women throughout the United States. Completed interviews were weighted by a number of Census variables including age and geographic region, to ensure a reliable and accurate representation of the total U.S. population.