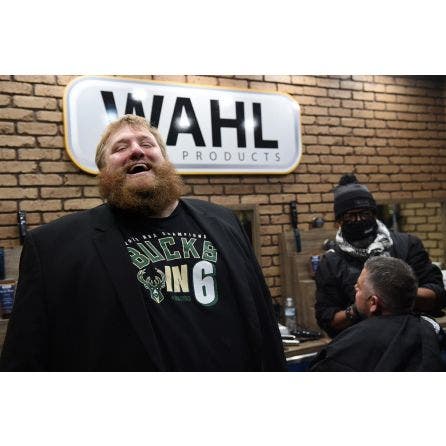 Milwaukee, WI. (November 23, 2021) – When Ben Tajnai performs the national anthem at Milwaukee Bucks games, they typically win — last Wednesday night was no different. After the team’s lucky charm dazzled the crowd with his rendition of ‘The Star-Spangled Banner,’ the Bucks went on to a 109-102 victory. But Bucks players weren’t the only winners – men’s grooming leader Wahl made sure of it. Newly dubbed as the ‘Most Talented Beard in America,’ Tajnai was able to celebrate his victory with 17,000 of his biggest supporters.

Prior to the game, all whiskers were welcomed to Fiserv Forum for free beard trims at Wahl’s giant Mobile Barbershop. Once visitors were camera-ready, they were invited to take a picture with the bearded winner himself. The fun continued inside the arena, as halftime concluded, Tajnai took his place center court and was presented with his 1st place, $20,000 check. Shortly after the on-court presentation, the Wahl ‘beard cam’ highlighted facial haired fans in the crowd.

“What an amazing evening for me and my family,” Tajnai said.  “It’s an honor to be named the ‘Most Talented Beard in America,’ especially in front of the people who voted for me. It was certainly a night I will never forget.”

Tajnai plans to use his winnings to take his wife and three kids on a well-deserved vacation. “What’s even better is that we know there will be money left over to donate to a charity,” he continued.

Wahl knows there’s a wealth of whiskered talent out there, so this past July the company launched a search for furry phenoms. The goal of the contest was to shine a spotlight on entertainers and achievers who make the world a better, or ‘bearder,’ place to live. Hundreds of hairy hopefuls submitted videos of their talents, 10 finalists were chosen, and public votes determined the top 3 winners. In addition to Tajnai’s 1st place $20,000 prize, the 2nd place winner won a hefty $10,000 and 3rd place walked away with $5,000.

131 view(s)
Posted in: Facial Hair
by Robyn Nowak
My Wish List
Last Added Items
Go to Wish List
You have no items in your wish list.