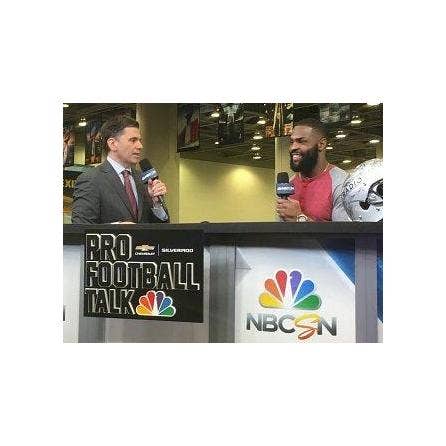 SAN FRANCISCO (February 4, 2016) – The reset button has been hit—in Philadelphia that is. And no one is happier than Philly running back DeMarco Murray. The former rushing leader’s first season with his new team had its share of ups and downs, but with a new coach, new outlook and some help from men’s grooming leader Wahl, Murray is ready for a fresh start.

Murray appeared on Radio Row in San Francisco today rocking a bold new beard, courtesy of Wahl. The men’s grooming leader reached out to Murray after his season wrapped to help him shake things up, namely his grooming routine. The company sent Murray its latest hardware and he did the rest. Murray brought his new look, which includes his patented clean cut hairstyle, and outlook on the season to the biggest stage.

“I’m not big on superstitions, but I do believe that when you look good, you feel good. So when Wahl reached out to me about a fresh start, I was all in, especially since I grew up using Wahl products,” said Murray.

To freshen up his look, Wahl hooked Murray up with the latest from its line of tools designed to meet the specific needs of African American men: The T-Pro Trimmer, which shaves, details, trims and outlines and features Wahl’s bump-prevent technology to deliver a smooth and even cut; and the Ultra Close Cut Pro Clipper, featuring self-sharpening, zero-overlap blades to deliver skin-close cutting without any pulling or snagging.

“Everyone deserves a fresh start, and we’re excited to team up with DeMarco on his,” said Steven Yde, division vice president of marketing for Wahl. “Confidence begins when you look at yourself in the mirror. With his new beard, we’re confident DeMarco will like what he sees heading into next season.”

For more on DeMarco Murray’s fresh start, including an exclusive Q&A, visit WahlGrooming.com. Check out the gallery of hair and facial hair styles to find Murray’s latest look and more. Connect with Wahl on Facebook, Twitter andInstagram for the latest grooming news.

About Wahl
Now in its 97th year, Wahl Clipper Corporation is an international industry leader in the manufacturing of products for consumer personal care and animal grooming as well as the professional beauty and barber salon trade. Headquartered in Sterling, Ill. Wahl products are available in 165 countries and employs some 2,000 people worldwide. For more information about WAHL, visit wahl.com.