Contest Proves Life is Better with a Beard: Wahl Launches Second Annual Search for the ‘Most Talented Beard in America’, Ready to Change Lives Again 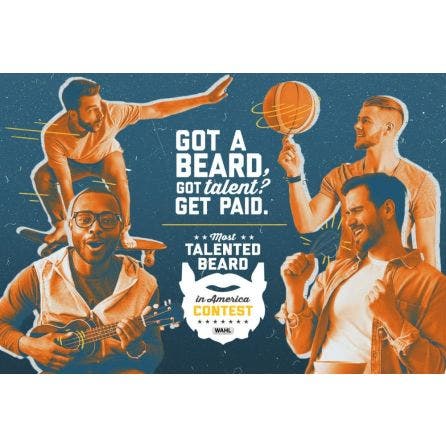 STERLING, Ill. (July 7, 2021) – When men’s grooming leader Wahl launched the first-ever ‘Most Talented Beard in America’ contest last year, there was no predicting the wealth of whiskered talent that was to come. Even more surprising was the positive impact the contest had on the lives of the winners. To keep the feel-good momentum rolling, from now until Aug. 6, 2021, Wahl will once again search for furry phenoms by asking men with beards to submit a video of themselves performing a talent. Prizes include a total of $40,000, a visit from Wahl’s mobile barbershop, and an arsenal of Wahl grooming gear to keep those beards looking (and performing) their best.

“We created this contest to spread positivity and celebrate all of the bearded guys out there,” said Steven Yde, division vice president for Wahl.  “We were blown away by the talent last year, and even more impressed with the inspiring stories of our top three winners. It’s our hope that we can again find exemplary men who are making the world a better, or ‘bearder,’ place to live.”

There’s no telling what gems the contest will uncover this year, but last year’s winners are inspiring indicators. The 3rd place winner was a multi-talented musician whose income had been greatly impacted because of the pandemic. The 2nd place winner was a deaf man who donated part of his winnings to a charity that supports families with deaf children. And the 1st place winner, Jonathan Brannan, used his $20,000 prize to cover the cost of adopting his new son who arrived in April 2021.

Jonathan has a lot to say about his life-altering experience with the ‘Most Talented Beard in America’ contest. “Take it from me, wear your beard loud and proud; you never know how it could pay off. I took a chance and put myself – and my beard – out there,” explained Brannan. “In my family’s case, it was literally life changing in that it helped us complete the adoption of our son without worrying about the financial side of the process.”

How to Enter the ‘Most Talented Beard in America’ Contest

From now until August 6, 2021, men with beards can submit a video of themselves performing a talent on the contest entry page at https://bit.ly/MostTalentedBeard. They can also get to the page by following @WahlGrooming on Facebook or Instagram. What kind of talent, you may ask? Anything, really. It can be singing, dancing, juggling, martial arts, ventriloquism or something no one’s ever heard of.

A panel of Wahl facial hair experts will select the top 10 fuzzy-faced finalists based on talent, creativity and a well-groomed beard. Each finalist will win $500 plus a Wahl Lithium Ion Stainless Steel Trimmer and a starter kit of Wahl’s new Beard Care line. Things get really exciting in late-August when public votes help determine the finalists’ fate in a follicular face-off. Prizes for the top three winners include a visit from the Wahl mobile barbershop, as well as the following: