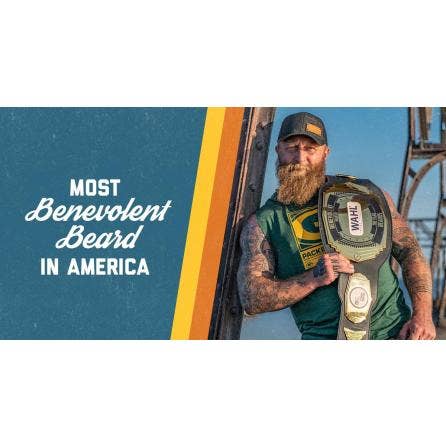 STERLING, Ill. (Sept. 29, 2022) – Ryan Baudhuin from Green Bay, WI, is a combat veteran who uses his charity ‘High Point Adventures’ to organize dream hunting trips for veterans struggling with return to civilian life. As the winner of the Wahl ‘Benevolent Beards’ Contest, Baudhuin scores $20,000 for himself, and $5,000 for his charity. He’ll also be crowned the new ‘Wahl Man of the Year,’ when Wahl hosts him at a beard grooming event during a Green Bay Packers game on Sunday, Oct. 16, 2022.

“The goal of this contest is to celebrate bearded men who combine good grooming with goodwill,” said Steven Yde, division vice president for Wahl. “By shining a spotlight on men who are making the world a better, or ‘bearder,’ place to live, we hope it will inspire others to do the same. Ryan is a perfect example of this, and we’re proud to call him our new ‘Wahl Man of the Year.’”

According to Baudhuin, the healing effects of the outdoors saved his life after his return home from war. He now feels it’s his duty to serve other veterans who have sacrificed so much. “My charity is small, and budgets are tight, so this prize will go far in helping to cover about seven hunting trips,” he continued. “It’s amazing the impact these trips can have on the lives of the veterans who attend – I’m so grateful I’m able to help even more people now.”

Baudhuin says he’s overwhelmed by the number of family, friends and acquaintances who embraced his cause and voted for him. He’s also proud to be among the following runners-up, who he calls “Class Acts”:

About the Wahl ‘Benevolent Beards’ Contest

The Wahl ‘Benevolent Beards’ Contest started this past April with a quest to discover guys who are making the world a ‘bearder’ place to live. The goal was to reward bearded men who are doing good through charitable efforts. Men from across the country submitted a video of themselves either explaining or demonstrating how they support a charity. What kind of charity? As long as it was a 501(c)(3) organization with a goal to impact the world positively, all charities were considered. Five fuzzy-faced finalists were chosen, and America’s votes decided the winner.

In celebration of Baudhuin’s win, Wahl will park its giant Mobile Barbershop outside Lambeau Field on game-day Sunday, Oct. 16, 2022, from 8 a.m. – 12 p.m. (central), it will be located on the West Side of the stadium by the Kwik Trip Gate. All whiskers are welcome to visit the barbershop, and for every FREE beard trim Wahl will donate $100 to support his charity ‘High Point Adventures,’ up to $5,000.

Celebrating its 103rd anniversary, Wahl continues to help men look and feel their best with innovative products manufactured to define and elevate the men’s grooming category. The company set the standard with the first-ever practical electric hair clipper in 1919, and later strengthened its leadership with the world’s first battery-powered facial hair trimmer. Wahl crossed its centennial milestone by introducing a complete line of beard care products including a beard oil and beard softener. It’s this continued commitment to excellence that has solidified Wahl’s place as the world’s go-to brand for men’s grooming solutions. For more information, visit WahlUSA.com