Best Facial Hair in the Country Hails From the Fuzz Capital 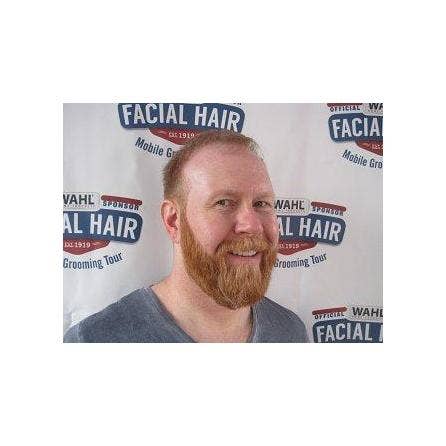 STERLING, Ill. (Jan. 7, 2016) – After traveling to the Top 10 Most Facial Hair Friendly Cities in America, and scouring through hundreds of contest entries, 11 men ‘made the cut’ as finalists in Wahl’s annual Man of the Year Contest. Washington D.C. topped the list of cities most welcoming of whiskers, and the Capital City prevailed yet again as one of its bearded locals, Steve Carpinelli, triumphed with the coveted title of Wahl Man of the Year.

“Our annual facial hair face-off is designed to find and celebrate guys who embrace a whiskered lifestyle,” said Steven Yde, division vice president of marketing for Wahl. “Not only do we seek out men with a knack for grooming, we look for men who consider facial hair to be an integral part of who they are.”

“Steve Carpinelli is a perfect example of this,” continued Yde. “He’s an advocate for facial hair, he’s passionate about it — and he has a great beard.”

Carpinelli has had his beard since 2000, and plans to have it for the rest of his life. “My beard is a definable part of me; it stands out and is one of the first things people notice,” he said. “I’ve also found that facial hair can segue into conversations about interests or passions. For example, facial hair has been a way for me to honor my roots and represent a family heritage I’m proud of.”

As the next Wahl Man of the Year, Carpinelli takes home a $1,500 Grand Prize; in addition, he will reign supreme throughout 2016 and will be featured in a national advertisement. Online votes helped Carpinelli rise to the top of the facial hair food chain, with support no doubt, from his fellow neighbors in the No.1 Facial Hair Friendly City — Washington D.C.

About the Wahl Man of the Year

Dubbed the ultimate ‘mane’ event, the Wahl Man of the Year Contest kicked off in June 2015 when Wahl announced the 2015 Most Facial Hair Friendly Cities in America. The journey involved a 30-foot mobile barbershop and a team of Master Barbers traveling from city to city to give guys free trims and grooming advice. Whiskered delegates were chosen at each of the 10 most facial hair friendly cities, and one was chosen from online entries. These 11 finalists each won $500 and a Lithium Ion Stainless Steel Trimmer, but only one demonstrated facial hair excellence above all others.

About Wahl Grooming
A quarter-century ago, Wahl recognized the need for an easier way to keep facial hair well groomed and created the men’s trimmer category. The Wahl Groomsman was the world’s first battery-powered facial hair trimmer, and featured the same high-quality, precision blade technology that had defined the brand since it began in 1919. Today, Wahl offers a complete line of facial hair trimmers that features the latest in power and convenience, continuing the company’s legacy of superior trimming innovation. For more information, visit WahlUSA.com.