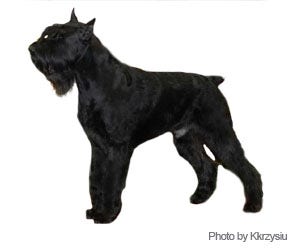 Brush the Giant Schnauzer's coat carefully by focusing on the facial furnishings and legs, with a large slicker brush or a pin brush with large bristles. The long beard and mustache will probably need to be washed or at least combed through with a small metal comb after most meals.

The general rule of thumb for dog bathing is every three months but wire-coated dogs can be done with greater frequency, often within a four-to-six week range. The coat should end up fresh smelling, shiny, with no loose or shedding hair. First give the dog a good brushing to remove dead hair and mats. Place a rubber mat in the tub to provide secure footing and fill the tub with three to four inches of lukewarm water. Use a spray hose, pitcher or unbreakable cup to wet the dog, taking caution to avoid getting water in the eyes, ears and nose. Massage in pet shampoo, saving the head for last. Immediately rinse thoroughly, starting with the head to prevent soap from dripping into the eyes. Towel dry. The coat should be fresh smelling, with no loose or shedding hair.

Many owners choose to clip their Giant Schnauzer's coat once a month. This will eventually change the texture of the coat from wiry to soft, like the under coat. This is perfectly fine for pet Schnauzers — in fact, it makes caring for the coat much easier. If you plan to show your Giant Schnauzer, you'll need to hand-strip the coat and remove dead hairs about once a month.

It is always important to routinely clean your dog's eyes and ears, and examine for potential infections. Wire coated dogs have sensitive ears covered in hair that  need to be checked weekly for infection and cleaned with a cotton ball. Gently wipe a cotton ball moistened with mineral oil, olive oil or witch hazel in your dog's ear, being careful to avoid the ear canal. Never use a Q-Tip, which could cause damage to the inner ear if your dog suddenly shakes or jerks his head. Bushy hair growth within the ear can be thinned with tweezers or blunt scissors. Use a small trimmer to trim excess hair around the eyes, ears and face. West Highland Terriers and other small terriers with white coats are prone to developing tear stains around the eyes, so clean around their eyes with a cotton ball or soft cloth and use a small trimmer to trim excess hair around their eyes.