How to Eat to Reduce Stress

When it comes to stress, what you do and do not eat can play a major role in how long it stays and how much it affects you.

There are many ways to deal with stress, including exercise, yoga, massage and meditation. Nutrition, however, is an avenue that can’t be overlooked. Eating and drinking sensibly helps fuel the body to produce the chemicals and neurotransmitters that fight stress and keep us in the right state of mind.

Need help deciding what you need?

Where you hurt and why you’re hurting are two key factors in deciding which massager is best for your specific pain relief.

Rest and/or active recovery: First of all, ease into workouts. If you haven’t been working out on a regular basis, going full throttle right away, particularly with consecutive-day workouts, is going to result and aching muscles.

Hydrate: Drinking water during and after exercise helps the body rid itself of toxins, while fighting off dehydration, which can result in painful muscles and excruciating muscle cramps.

Proper nutrition: Protein sources are necessary to rebuild muscle tissue and fuel the function of various cells, tissues and enzymes. Carbohydrates are vital, as well. 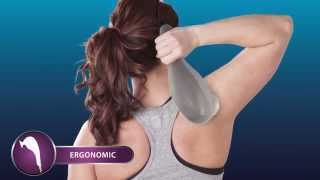